Perennials for the Full Sun Garden

Beebalms have long been popular with gardeners thanks to their vibrant, midsummer flowers, attractiveness to a range of pollinators, and their natural resistance to browsing deer. They also have some downsides which include leafless lower stems and a propensity for powdery mildew. A new series of Beebalms to try is the Sugar Buzz® series.  This series consists of compact, well branched plants in a range of colors, the most striking of which is ‘Rockin’ Raspberry’PPAF which flaunts moody, deep raspberry colored flowers over dark green leaves with a burgundy tint. The color combo is striking and unique among beebalm cultivars.  It’s better than average for mildew resistance - we saw a little, but only a little and only at the very end of the season. Winter hardy to -30°F . 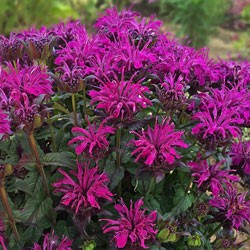 Like beebalms, Tall Garden Phlox has been a perennial staple for decades due to its showy summer flowers and attractiveness to pollinators, but it too suffers with powdery mildew. In 2017, the Mt. Cuba Center finished a three year trial that included 82 different Phlox and according to their report, “Phlox paniculata 'Jeana' is, without a doubt, the best-performing phlox from the trial.” At 5’ tall, Jeana was the tallest Phlox in the trial, bloomed like crazy from July to September, and proved exceptionally resistant to powdery mildew. Her bubblegum pink flowers are individually much smaller than any other Tall Garden Phlox but there are so many of them that the flower show is every bit as spectacular as that of other varieties. Jeana is also a butterfly favorite and by quite a margin. For two years, the Mt. Cuba group tracked the number of butterfly visits to each variety. ‘Jeana’ had four times the visits of any other Phlox in the trial. Winter hardy to -30°F. 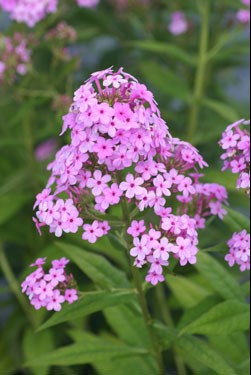 Counterintuitively, not all Tall Garden Phlox are tall. Several breeding programs are working to make them smaller which allows gardeners to use them in places where the taller, classic varieties wouldn’t work. At 10-12” tall, the new Phlox Bambini® series is the shortest to date. In our trials, the Bambini® series demonstrated better resistance to powdery mildew than the two other popular dwarf series. Keep an eye out for ‘Candy Crush’ which boasts stunning variegated pink and white flowers. Winter hardy to -30°F. 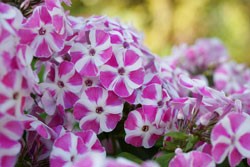 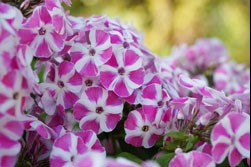 Also a Phlox and tallish, but not a Tall Garden Phlox (plant names are weird that way) is the remarkable Phlox ‘Fashionably Early Crystal’ PP28679 which defies conventional wisdom for bloom time and disease resistance. Its flowers are snow white with a light purple eye and, while they look very similar to traditional garden phlox, they start blooming three-ish weeks earlier (late May) and continue to flower right through the summer. Some late season rebloom is possible, but don’t expect the same summer flower show. The shiny dark green leaves stay attractive all season long thanks to their exceptional resistance to powdery mildew. We’ve not seen a speck of mildew on these over two years. At 2 – 2.5’ tall, it’s a good option for the middle of the full sun border. Winter hardy to -30°F 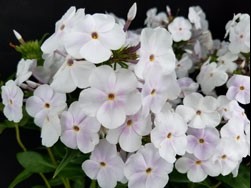 As a counterpoint to the flamboyance of Phlox and beebalms, ornamental grasses offer a graceful texture and movement in the garden that’s hard to match. They’re also deer resistant and drought tolerant, but more than a few can become problematic due to reseeding in the garden and beyond. Miscanthus Scout™, from the University of Georgia’s breeding program, offers all the benefits without concerns of reseeding as it’s infertile. Scout’s thin green leaves and upright, vase-shaped habit are a dead ringer for the popular ‘Gracillimus’ but at 6’ tall, Scout™ is a foot shorter. Scout™ also blooms almost a month earlier than ‘Gracillimus’ so you can enjoy its flowers in September. Winter hardy to -20°F. 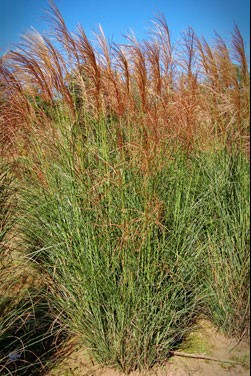